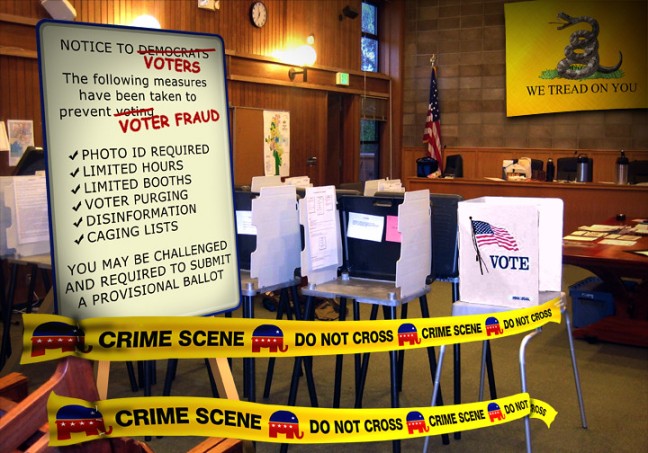 When the United States Supreme Court weakened Voting Rights Act protections in 2013, many worried that it would open the floodgates to a new wave of voter suppression.

There was good reason to be concerned, as the Brennan Center for Justice has once again confirmed.

A report it released in July 2018 found that from 2014 to 2016—the two years following the 2013 decision in Shelby County v. Holder, 570 U.S. 529—almost 16 million people throughout the U.S. were removed from voting rolls.  That was almost four million more than the number who were removed from voter lists between 2006 and 2008, a roughly 33% increase that far exceeded the growth in total population (6%) and total registered voters (18%) over that same time frame.

The Brennan Center also found that the purging occurred at a higher rate in those areas, mainly in the South, that because of their history of discrimination had been subject to the protections abrogated by the Supreme Court in Shelby.  For the two election cycles between 2012 and 2016, those so-called preclearance jurisdictions, which were let off the hook by the Shelby ruling, had purge rates significantly higher than elsewhere. The Center calculated that if those jurisdictions had remained subject to the previous constraints, two million fewer voters would have been struck from the lists. Texas alone erased more than 363,000 voters in the first election cycle after Shelby.

Now, a follow-up report, made public on August 1, has found that the heightened rate of voter purges continued between 2016 and 2018.

According to the Brennan Center’s analysis, that two-year period saw at least 17 million voters purged nationwide. And the preclearance jurisdictions had purge rates that were 40% higher than elsewhere, resulting in the removal of an estimated 1.1 million more voters than if the rates had been equal.

So, what are these preclearance areas and what did the Shelby holding do?

The Voting Rights Act of 1965, 42 U. S. C. §1973(a), generally bans any “standard, practice, or procedure” that “results in a denial or abridgement of the right of any citizen . . . to vote on account of race or color.” That aspect of the law applies anywhere in the U.S. and was not impacted by Shelby.

The sections that were affected were Sections 4(b) and 5. Section 5 requires certain jurisdictions to obtain approval—aka preclearance—from the U.S. Attorney General or the U.S. District Court for the District of Columbia before implementing any changes to voting that diminish the ability of citizens, on account of race, color, or language minority status, “to elect their preferred candidates of choice.” It also forbids changes “with any discriminatory purpose.”

Section 4(b) defines which jurisdictions are covered by Section 5. It initially referenced states or political subdivisions that maintained a test or device–such as a literacy or knowledge test—as a prerequisite to voting as of November 1, 1964, and had less than a 50% voter registration or turnout in the 1964 Presidential election. Those criteria were later tweaked to expand the definition of test or device to include the practice of providing English-only voting materials in places where over five percent of voting-age citizens spoke a single language other than English and to encompass subsequent years of low registration and turnout.

Prior to Shelby, preclearance jurisdictions had the burden to prove that a change had neither the purpose nor effect of discriminating on the basis of race or color, and language minority status and if they failed to meet this burden, the federal government denied preclearance and the change did not go into effect.

When the Voting Rights Act was first implemented on Aug. 7, 1965, the preclearance jurisdictions were all Southern locales that had a history of segregation—the states of Alabama, Georgia, Louisiana, Mississippi, South Carolina and Virginia, as well as 39 of North Carolina’s 100 counties and one county in Arizona.

Other jurisdictions were added over the years: the states of Alaska. Arizona and Texas; 14 more North Carolina counties and counties in California, Florida, New York and South Dakota; and two municipalities in Michigan.

In New York City, Manhattan, Brooklyn and the Bronx were included in 1971 because a 1921 law imposing an English-language literacy test had depressed the level of voter registration for Puerto Rican-born residents below a specified floor in those counties.

The Act contained allowed covered jurisdictions to bail out of the preclearance requirement if they had not used a test or device in the preceding five years “for the purpose or with the effect of denying or abridging the right to vote on account of race or color.”  The time frame was later increased to 10 years. Over the life of the law, nearly 200 jurisdictions have utilized the proviso. New Hampshire did so on March 1, 2013, just three months before Shelby lifted the requirement for all.

The jurisdictions that were not subject to preclearance were not left free to discriminate in their voting laws given that the changes they made could be challenged after the fact. But thay did not have the hurdle of having to secure Department of Justice approval up front.

The preclearance provisions of the Act were supposed to expire after five years but were repeatedly reauthorized—most recently in 2006, for a 25-year period,  by way of the Fannie Lou Hamer, Rosa Parks, and Coretta Scott King Voting Rights Reauthorization and Amendments Act.

Then, Shelby County in Alabama sued the Attorney General (then Eric Holder), seeking a declaratory judgment that Sections 4(b) and 5 are facially unconstitutional, as well as a permanent injunction against their enforcement.

A closely divided Supreme Court upheld Section 5’s preclearance requirement but struck down Section 4 as unconstitutional on the ground that it singled out jurisdictions not based on current conditions regarding minority registration and turnout, but on “decades old data and eradicated practices.”  Chief Justice John Roberts, writing for a five-member majority, reasoned that the discriminatory tests and low voter registration and turnout that justified the formula no longer existed.

Four dissenters, on the other hand, led by Justice Ruth Bader Ginsberg, pointed out that the majority opinion failed to consider that current conditions exist because of the preclearance requirement and that, without it, there was a real threat of retrogression. “Throwing out preclearance when it has worked and is continuing to work to stop discriminatory changes is like throwing away your umbrella in a rainstorm because you are not getting wet,” Ginsberg notoriously analogized.

Within 24 hours of the Court’s decision, Alabama announced that it would start requiring photo identification to vote. It followed up within the ensuing year by closing 31 offices where the necessary IDs could be obtained, claiming budget cuts were to blame, though the locations affected were in predominantly minority areas.

In the aftermath of Shelby, other places have enacted a variety of voting restrictions, including ID requirements, reductions in the number of polling places,  and shortened periods for early voting.

Georgia has been using an exact match criterion for voter registration. For example, if your driver’s license or other official documents include your middle initial or name but you don’t write that middle initial or name on the voter registration form, your registration gets bounced. The same thing happens if you have a two-part last name and you leave a space between the two parts when you register but there is no space on other official records (or vice versa). More than 50,000 Georgians were reportedly impacted by the exact match approach heading into the fall 2018 elections.

North Dakota, though not a preclearance state, began requiring not just a photo ID but one with a residential street address rather than just a mailing address, disenfranchising many native Americans who lack street addresses because they live on reservations.

And then, of course, there are the purges analyzed by the Brennan Center based on data from the federal Election Assistance Commission, an independent federal agency created by the Help America Vote Act of 2002 that serves as a national clearinghouse and resource for information regarding the administration of elections.

The fact that the purge rate for preclearance areas, once in line with other places, soared above them after Shelby is deeply troubling. It suggests that preclearance worked and now that the fetters are off, some jurisdictions now feel emboldened to put up barriers to voting.

Purging voter lists is not inherently wrong or discriminatory. People die and relocate.  They should register and vote at the new address and be stricken from the voter rolls where they used to live. But what is happening goes well beyond that.

Much purging is done using unreliable methods and for seemingly suspect reasons. Eligible voters are removed because their names merely resemble those of others who have died or relocated. According to the Brennan Center, minority voters are more likely to share names than white voters, exposing them to a greater risk of mistaken purging.

One indicator that the purges are not a straightforward exercise in keeping the voter lists up-to-date is that the purge rate varies so widely from state to state. According to the Brennan Center’s data for 2016 to 2018,  they ranged from lows of 1.4% and 2.8%, respectively, in New Mexico and California, to a high of 22% in Indiana. In-between states included Wisconsin and Virginia, at more than 14%.

The Brennan Center’s 2018 report highlighted a purge that took place in New York City, where more than 200,000 voters were improperly scrubbed from the voting rolls prior to the April 2016 presidential primary. Common Cause sued over the massive disenfranchisment, alleging that the New York City Board of Elections violated the National Voter Registration Act of 1993, in a federal lawsuit joined by the U.S. and New York State governments as intervening plaintiffs. A November 2017 consent decree resolving the case required the Board of Elections to overhaul its voter registration and list maintenance policies and procedures, adequately train relevant staff, and submit to regular monitoring and oversight of voter registration and list maintenance activities. The Board further agreed to review every voter registration cancelled since July 1, 2013, to determine whether the cancellations were justified and reinstate any improperly cancelled registrations.

Voters can also get kicked off the list if they are convicted of a crime in one of the 48 states—all but Maine and Vermont—that take away voting rights on criminal convictions. In New Jersey, those rights are restored on completion of the sentence, including imprisonment, probation and parole. Other states allow people on probation to vote and others restore voting rights automatically on release from prison. Eleven states, however, including Arizona, Iowa, Missouri and Tennessee, never restore voting rights, at least for some crimes.

Legislation that would update the Voting Rights Act to restore the preclearance requirement has been introduced repeatedly since the Shelby decision without going anywhere.

The new Democratic House majority, however, has breathed new hope into the endeavor.  On March 8, the House passed the For the People Act, H.R. 1. Section 2001 of the Act discusses how Shelby “gutted decades-long Federal protections for communities of color that face historic and continuing discrimination, emboldening States and local jurisdictions to pass voter suppression laws and implement procedures” that impede the right to vote and reaffirms Congress’ commitment to restore the Voting Rights Act.

The Senate bill and H.R. 4, both known as the Voting Rights Enhancement Act, were introduced in their respective houses on Feb. 26, by Senator Patrick Leahey, Democrat of Vermont, and Terry Sewell, an Alabama Democrat who represents Selma, Alabama.  No action has yet been taken on either of the bills, whose 45 and 223 co-sponsors, respectively, are all Democrats.

H.R. 1799, the Voting Rights Amendment Act of 2019, introduced on March 14 by James Sensenbrenner, a Wisconsin Republican, has bipartisan backing—3 Republicans and 14 Democrats, including House Judiciary Committee Chair, Jerrold Nadler, a New York  Democrat—but no one from NJ.

A wealth of additional information about voter purges and other election-related issues is available at the website for The Brennan Center, based at New York University Law School and named after the late U.S. Supreme Court Justice William J. Brennan,  who was born and raised in Newark.