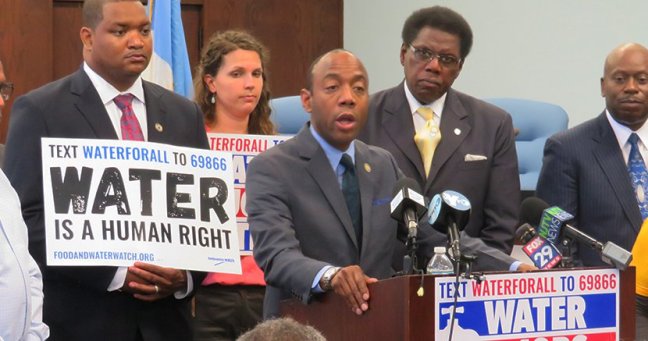 Atlantic City residents can stop worrying that the state, which took over their local government in the fall of 2016, is going to sell or lease their water system out from under them, at least in the near future.

In a statement made public on December 20, Jeffrey Chiesa, who was chosen by Governor Chris Christie to oversee the state takeover of the City, announced “the public can rest assured that the MUA [Municipal Utilities Authority] will not be privatized by the State.”

He cited “the important role” of the MUA, in the community and the “visible pride” that City residents and business have in it, as evidenced in the petition drive they conducted to protect it and the vote by the Atlantic City Council to give residents a say in the fate of their water system.

Chiesa was referring to the initiative and referendum (I&R) process utilized by Atlantic City residents to block any privatization of the Atlantic City MUA, which serves the City’s almost 40,000 residents with its two reservoirs, a dozen wells, three water towers, a water treatment plant and over 150 plus miles of water transmission  lines.

I&R is a state-law mechanism by which local governments can be forced to take action if enough residents sign a petition calling on them to do so. A committee of five petitioners must gather signatures of registered voters equal in number to at least 15 percent of the vote in the most recent election for state Assembly.

The Atlantic City activists seeking to block the sale were represented by NJ Appleseed Executive Director Renée Steinhagen and backed by a coalition of more than 40 national and state groups led by Food & Water Watch, the ACLU-NJ and the NAACP.

Organizations that endorsed the effort included the New Jersey Working Families Alliance, NJ-NOW, Center for Constitutional Rights, Color of Change and labor unions including AFSCME, AFL-CIO and the Communication Workers of America, as well as national groups like tfor

It was not the first time Steinhagen has utilized the I&R law to prevent an attempt at privatizing a public water system.

She successfully employed it in 2012 when Newark mayor Cory Booker sought to sell the City’s water and sewer systems.

Steinhagen has also used it to obtain enactment of local laws regarding rent control and pay to play.

Recognition of how crucial is to protect public water systems has been heightened in the wake of the Flint, Michigan lead poisoning scandal, following a state takeover, as well as by subsequent revelations about lead and other contamination in water supplies elsewhere.

Speaking at the April 20 launch of the petition project, NAACP head Cornell Brooks, tied the petitioners’ advocacy for water justice to what happened in Flint, saying :”Water rights are civil rights, and civil rights are human rights.”

The AC Citizens Against the State Takeover campaign gathered more than 2,400 signatures on a petition proposing an ordinance that explicitly gives Atlantic City voters the same statutory right of participation, including the right of referendum, in any official action to transfer sell, or lease the operation and assets of the MUA, that New Jerseyans throughout the state have under the law regarding such decisions. In other words, there can be no sale or lease of the system without voter approval.

That was a right the people already had but the organizers believed the ordinance was necessary to counter the law that allowed the state to take over the city, which violated that right.

The City Council unanimously voted to adopt the voter approval ordinance on July 11.

Chiesa’s announcement, five months later, after months of silence on the issue, was hailed by Food & Water Watch spokeswoman Lena Smith as “a very definitive victory for the residents and activists who have fought to protect the ACMUA amid a state takeover.”

The Press of Atlantic City reported that the City’s Mayor-Elect Frank Gilliam said that he approached the state this month and asked for a statement to relay to the public because “people need closure.”

Though Chiesa’s statement does bring a degree of closure, it is not a permanent guarantee of protection for the MUA.

A bill signed into law by Christie in February 2015, the Water Infrastructure Protection Act, A-3628, which paves the way for privatization, remains on the books.  It authorizes municipalities to sell their water assets or lease them long-term to a “capable” private or public entity, without the otherwise required referendum, if an “emergent condition” exists.

Conditions that qualify as “emergent” include a “demonstrated lack of historical investment, repair, or sustainable maintenance,” “material damage” to the system’s infrastructure, inability to provide sufficient quantities of uncontaminated water and the system owner’s lack of “financial, technical, or managerial capacity to adequately address” such problems.

A second law, enacted in May 2016, the Municipal Stabilization and Recovery Act, S-1711/A-2659, set the stage for such privatization to happen in Atlantic City. Under that statute, a municipality that has seen a drop of more than 50 percent in its total assessed property values over the past five years and an increase of outstanding debt by the same percentage over the same period can be designated “a municipality in need of stabilization and recovery.” It then has 50 days to come up with a five-year financial recovery plan, including a balanced budget, under threat of a state takeover.

The legislation does not mention Atlantic City but clearly targeted the struggling municipality, whose tax revenues plummeted after four casinos closed in 2014. It also owed hundreds of millions to casinos from tax appeals. The financial plan Atlantic City submitted was rejected by the state, which took over in November 2016.

Since then, the state has overseen the City’s finances, including its payroll, assets, taxes  and union contracts. Among other changes, it privatized trash collection, slashed pay for police and firefighters and sought massive layoffs from those departments.

The takeover has been very costly to the already strapped City. Chiesa’s law firm, Chiesa Shahinian and Giantomasi in West Orange, had billed it nearly $3 million as of July.

Chiesa, a Christie crony, served as his Attorney General from 2012 to 2013 and following the death of U.S. Senator Frank Lautenberg in 2013, was named by Christie to replace him until a special election in the fall, which gave the seat to Cory Booker.

Whether the takeover will continue under the incoming gubernatorial administration of Democrat Phil Murphy remains to be seen. Murphy has appointed his running mate, current Assemblywoman Sheila Oliver and the incoming Lieutenant Governor, to head up the Department of Community Affairs, which has oversight of Atlantic City.

Food & Water Watch’s Smith has described the privatization attempt in Atlantic City as an example of “crony capitalism,” pushed by the political machine of Democratic power broker George Norcross, whose brother Philip is a lobbyist for New Jersey American Water Company.

A 2010 study by Food & Water Watch of water privatization in New Jersey found, among other things, that private operation of water systems adds 64 percent, $153 a year, onto the typical New Jersey household’s water bill. It also had a “questionable track record,” which included providing contaminated water in Dover Township and selling off watershed land meant to protect Bergen County water sources.

A more general Food & Water Watch study on water system privatization points out other problems including loss of public input and accountability.